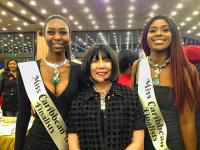 With two of the Miss Caribbean Finalists at the Commonwealth Countries League fair which was held in Kensington on 11th November 2017. The two finalists are wearing my necklaces.

Attended the Luxury Watch Show at the Saatchi Gallery. I was given a £110,000 watch to try on at the Faberge stand. Oops I forget to take a snap with it on my wrist!

I was approached to show at the CCL (Commonwealth Countries League) fair in Kensington, This money raised is for Commonwealth girls education. Again the Malaysian High Commissioner was there with his wife. We managed to take a picture together this time round