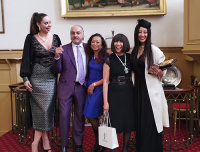 Some of my guests posing with me at the private chapel in Kensington Palace.

I was invited to collaborate with Serena Richards to fund raise for the British Heart Foundation at her private apartment in Kensington Palace. Serena holds the Queen's warrant for selling her silk flowers arrangement. All the rooms in her apartment were bedecked with her silk flower arrangements. amongst the floral beauty I had my collection of jewellery displayed. The guests started arriving at 10.30 a.m. and at mid morning we were escorted to the chapel within the palace grounds. Serena then gave a short talk of this chapel which was seeped in historical events dating back to Queen Victoria's era to the present. It was a fascinating talk. In this chapel we also had an auction of my chameleon necklace and raised
£450 for the British Heart Foundation. Saedah Neale was the winning bidder. She is truly a fan of my jewellery and can boast of a fair collection she had bought over time. Thank you Saedah.

After the coffee morning, a group of us adjourned to the Royal Garden Hotel and headed towards Min Jiang restaurant on the 10th floor, a restaurant renowned for its gourmet Chinese cuisine. Everyone went home happy after the lunch with the thought they had done their bit for The British Heart Foundation. It was an excellent day and a very big thank you to all my guests and supporters.

The British Malaysian Society annual dinner was held at the Army and Navy private club at Pall Mall, London. The guests of honour were the UK High Commissioner of Malaysia and also the British High Commissioner of Malaysia. I was seated next to Peter Hunter, a retired major. He was one interesting dinner guest. He was also the man behind the Polo Match event at Ham (near Richmond) private Polo Club and he himself is also a great polo player.

PAWA 10th Anniversary Black Tie dinner at the prestigious Merchant Taylor Hall in the city of London. I was the guest of Mei Sim Lai. MCM played an important part of the event as their sponsor. The owner of MCM, a high end global handbag company, gave a very personal speech of a big gender divide in her traditional Korean family. the drove her to become what she is today. I really warmed to her immediately and would certainly buy a MCM handbag to support such courage sisterhood.
As usual Grace Bian was dress to her ninth in her couture gown not forgetting my stunning chameleon jade necklace sparkling round her neck.

I was invited by Grace Bian to attend the Women Chinese Entrepreneur Convention (WCEC) at Excel, London. China being the main host followed by some South East Asian countries. Malaysia was a participant too with flags flying and some high profile Malaysians in attendance. The dinner was delicious. I sat next to the life Chairman of the Hong Kong Chamber of Commerce, Mr Lawrence Ma. We chatted about Sir David Tang who was a mutual acquaintance for both of us.
Thank you Grace for inviting me

A drinks party organised to welcome Nicole Itano, the new Executive Director of tve, at Bright Courtyard restaurant. Lady Moody Stuart was there chatting up everybody. She is also a fan of my jewellery. Met Mr Trevor Cessford, the Chief Financial Officer of Bank of China International. Judging from his high position, he is quite easy to talk to. A very pleasant man indeed. As usual the dim sum canape were delicious, not forgetting the wine which was well chosen. Than you Mei Sim for your wonderful organisation. Even the Lord Mayor mentioned in his speech at the Mansion House Black Tie dinner in July the Brian Cox endorsed the fact that people in the parallel universe would know of Mei Sim