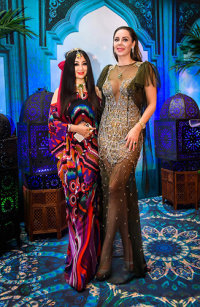 Grace Bian (on the left) posing with her friend at the Arabian Nights theme Event held at the Royal Institute of British Architects on 9th November 2019. Guests were dressed up to the ninths in Vivid colours.

Dinner at Bright Courtyard. VIP guest was the Ambassador of China, Liu Xian Ming. As usual the Chinese cuisine was delicious with six starters which was quite unusual. I did pig out a bit. It is not everyday you celebrate the 48 Club Young Icebreakers' 10th Anniversary.

Invited by Grace Bian to the Royal Institute of British Architects for a fun night of Arabian nights theme. Guests were dressed up to their ninth in Vivid colours. In our table was Lord Oxmantown who flew in from Ireland and Mr and Mrs David Newton, a direct descendent of Isaac Newton who found the Law of Gravity. What a fun night.

Invitation from David Podson to the Variety Charity for drinks at St. James Hotel & Club in Mayfair. Wonderful eclectic attendance of Trustees from the charity. The Queen is the Life Patron of the charity. A delightful evening and met with Hilary Alexandra, the guru journalist of many years. She is a warm and knowledgeable person.

Invited by Anthony Bush of Bushwood Estate to view his multi million property and not to mention the jaw dropping collection of his antiques. It was a lovely trip and both Grace Bian and I were spoilt rotton being fetched from London to Hertfordshire by his driver. We were even wined and dined at the gourmet restaurant in the Kingshead pub in Ivanhoe, Hertfordshire, supposedly to be the best restaurant in that area with Ronnie Woods of the Rolling Stones living nearby. We were driven back to London with Grace taking me to drinks at the Polo Bar in MayFair.

Invited by Dennis to Aldwych Theatre in London for Omar Kamal performance. Grace Bian, Rebecca Choo were also guests. The whole theatre was packed with Arabs who hero worshiped this person. We just went along with it. Dr Gary Savin was such a gentleman, looking after all the ladies buying us drinks!

Christmas Fair Market at the GuildHall in London. The fair was opened by Princess Alexandra. She is an elegant lady

Loaned some of necklaces to the singers and pianist at the Magic of Opera performance at St Gabriel's Church, Pimlico, London. The singers who also wore my necklaces at the opera were: Monique Loricchio Klongtruadroke, soprano; Giulia Laudano, Mezzzo-soprano and Zoe Drummond, soprano. Caroline Jaya-Ratnam was the accompanying pianist. After the opera we all adjourned to "Sicily", an Italian restaurant nearby. The food was delicious. Apparently the owner of "Sicily", Roberto, was the person who started Patisserie Valerie which he later sold.